All the bikes finally on Display at the

All the bikes on Display inside

All the bikes on Display inside

The all new display updates and images coming soon!!!

First few bikes being wheeled into the new display room. 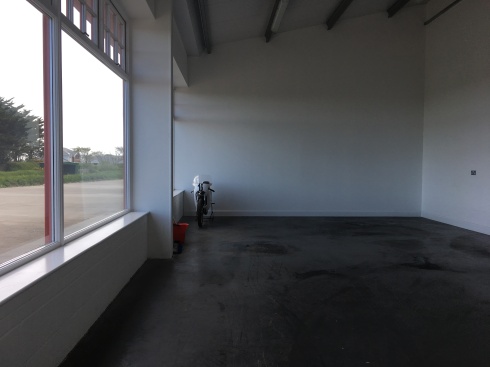 Now to ensure bikes are placed in correct date order. 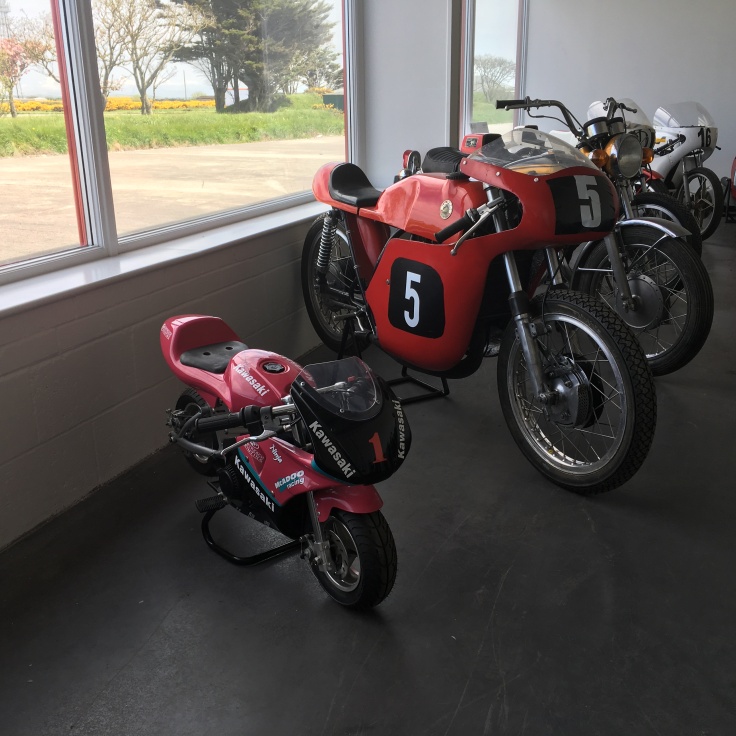 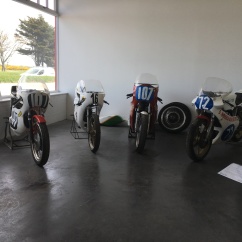 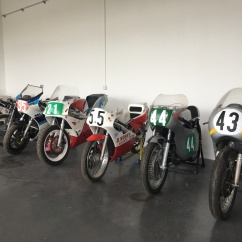 Now for the main banner to be hung, not as easy as first thought!!! 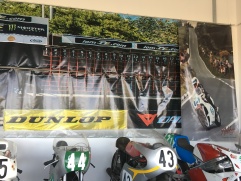 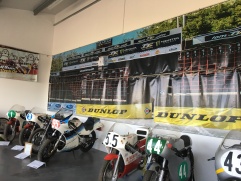 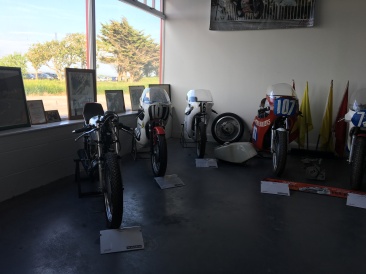 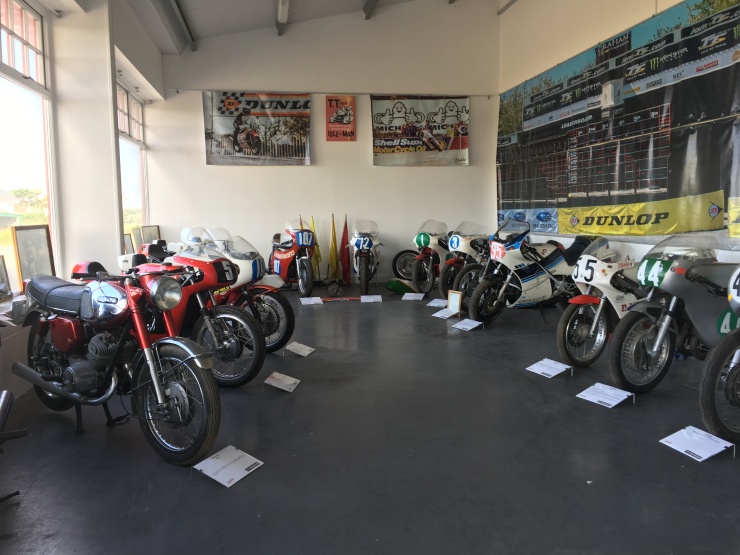 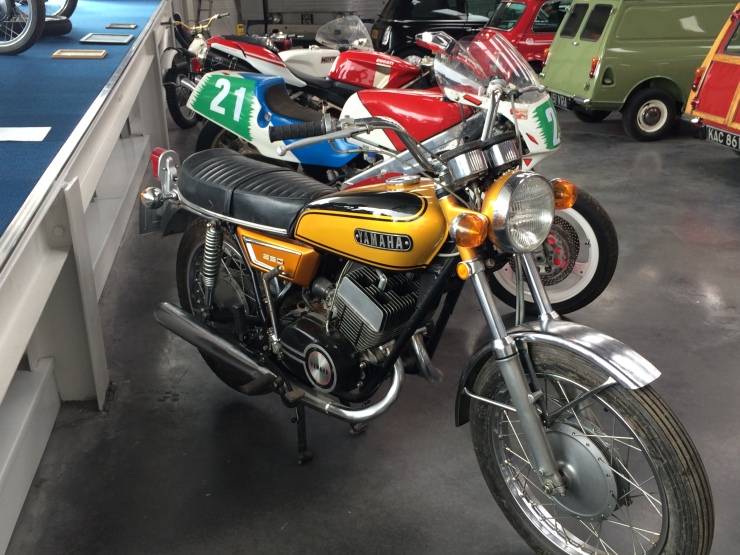 This bike was bought by “Nobby” as a full restoration project: 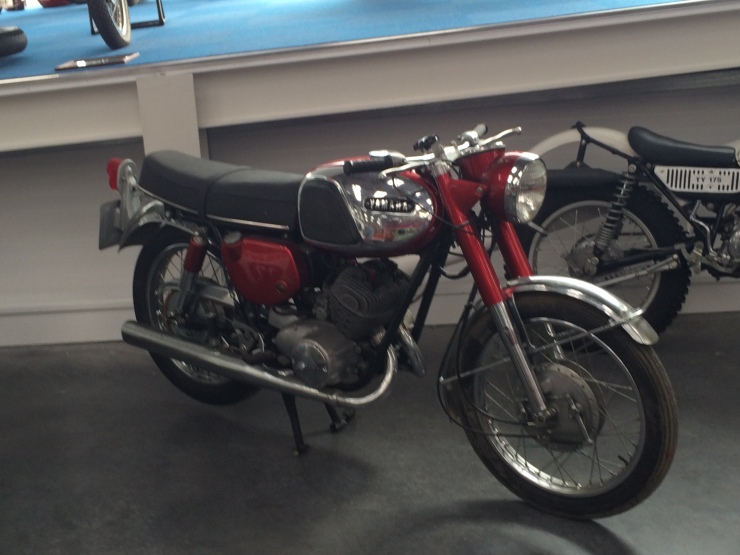 This bike was bought by “Nobby” as a barn find and painstakingly restored to its near original condition.  The development and production of Yamaha’s TD2 250cc engine was YDS based. 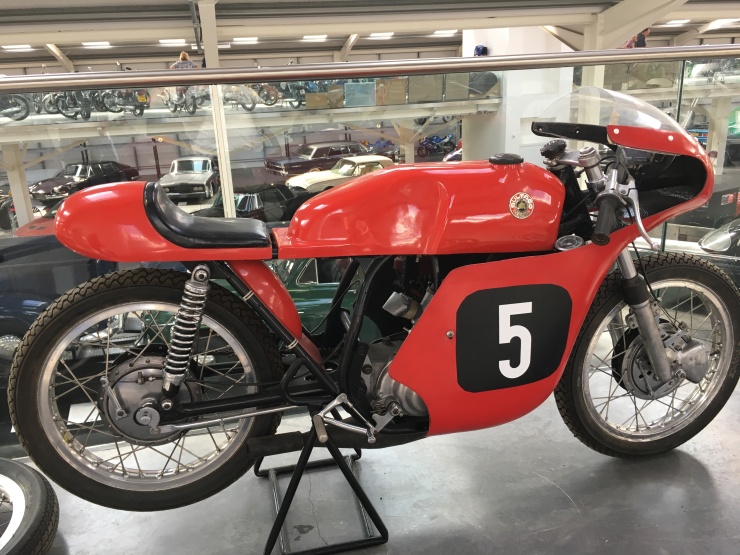 Best known for its off-road motorcycles, it may come as surprise that Spanish company Bultaco actually got its start because of road race bikes. Francisco Bulto, a former Spanish road racing champion, was chief of Montesa’s competition department in 1958 when management decided to cut costs by closing down the race team. Disillusioned, Bulto resigned and with several other former Montesa employees set up shop in an old farm building on his property. Thus Bultaco was born, the name a combination of Sr. Bulto’s surname and his nickname, “Paco.”.  This bike was purchased by “Nobby” to kick start his racing career off after a 10 year break. 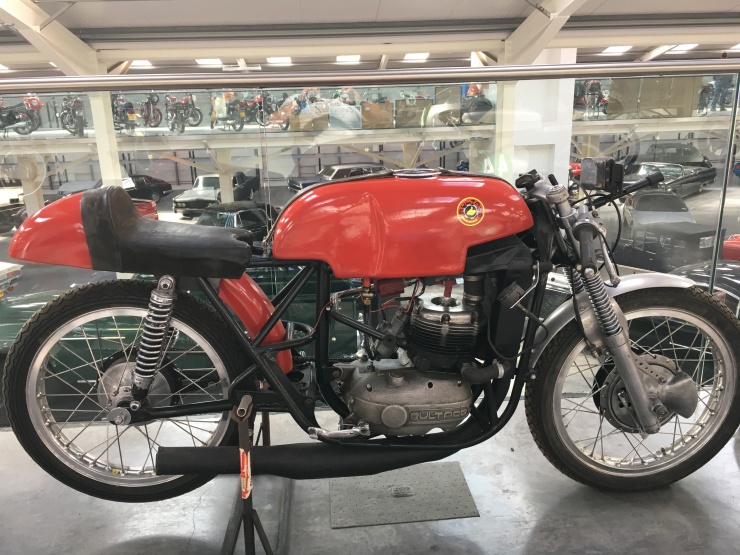 This bike was purchased by “Nobby” to contend the first Manx Grand Prix Classic Lightweight race in 1993.  After having a decent practice week the race was set Nobby set off at a blistering pace and was leading the race by ballaugh unfortunately upon arrival the primary chain in the engine snapped and that was the end of the race.  Having left the bike at the side of the road Nobby made his own back to the grandstand.

After the race was completed and the roads were open “Nobby” and his mechanic then set off to collect the bike, upon arrival were he had left the bike the bike was no where to be seen immediately “Nobby” contacted Gwen Crelin MBE a Marshall and one of the founder members of the Rescue Helicopter Fund from Ballaugh. Who was well known to all TT/MGP competitors for her hospitality?  Having made numerous calls to her endless list of contacts and the Police, the bike was later found that evening in the back of van at the Sea Terminal never to be seen again, fortunately that nights sailing had been cancelled due to bad weather and the bike was recovered.

This bike was purchased from now well known Honda Team Manager and ex racer Neil Tuxworth’s Motorcycles. “Nobby” purchased this bike to contest his first attempt at the 1980 Newcomers Manx Grand Prix. Having had quite a successful practice week setting a decent pace for the race “Nobby” set off at a thundering pace from the grandstand.  Slightly forgetting he was approaching Quarter Bridge and under-taking a fellow competitor and missing his braking point “Nobby” slid off on the first corner. Not the best start to a 4 lap race, he gathered himself/bike and proceeded with the race with half the screen missing. This was the start of a very long affair with the mountain circuit. 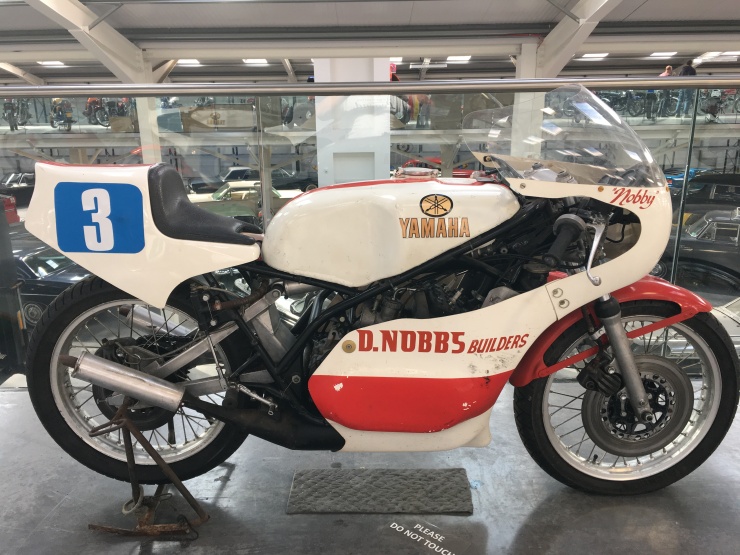 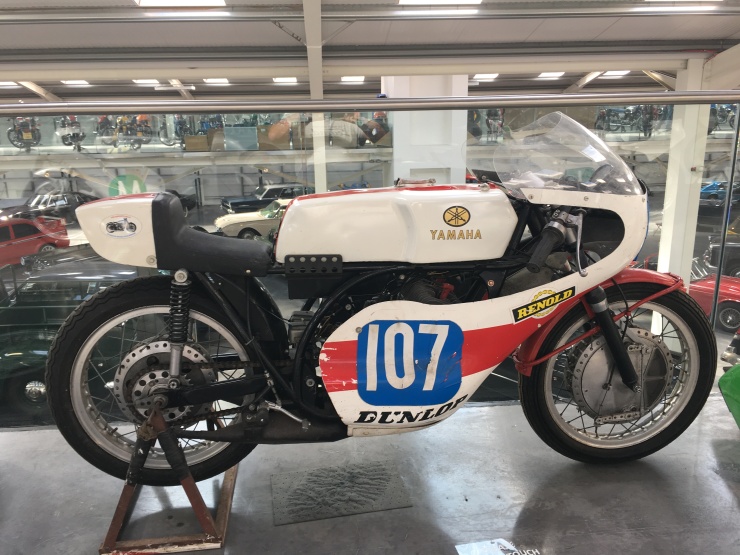 This bike was bought by “Nobby” to contest the 1984 Classic Junior Manx Grand Prix, He also rode this bike in many Classic Parade Laps.   The TD2’s 250cc engine was YDS  based, producing more than 44bhp @ 11,000rpm from its 5 port barrel. The exhaust port was raised over the TD1-C as well as being widened, the main transfer was also widened and the main inlet port actually reduced in area. Gone were the “booster port” and the notched pistons with holes in the back. The ring thickness was again reduced, now to 1mm. A new 11mm shorter exhaust also assisted in the increased power.

The TA 125 was a twin cylinder, air cooled, two stroke, twin shocked racer based on the company’s successful AS-3 roadbike, released in early 1974. In fact parts such as the swingarm, rear wheel etc. were identical to the AS-3, though the CS2 forks, DS6 front brake, DS6 front wheel, fuel tank and obviously fairing and clip-on handlebars were changed from the roadbike.

Motor-wise, Yamaha chose to keep the basic form of the AS-3 cylinders and heads. The only modifications were altering the porting and chrome lining the bores, changing the exhaust securing system to springs from bolts, and also changing the compression ratio. This combined with new exhausts, pistons, 28mm carbs, close ratio gearbox and a Hitachi CDI ignition system ( visually identical to the TZ units ) boosted the output to a competitive 24bhp at 12,500rpm.  Heavier clutch plates, strengthened crankcases around the main bearing journals, and the primary gear being secured to the crankshaft by key/keyway and nut rounded off the modifications to the motor. The TA125 was a 5 speed though there were a few factory 6 speeds around. There were  7  gear kits available,  for road use. 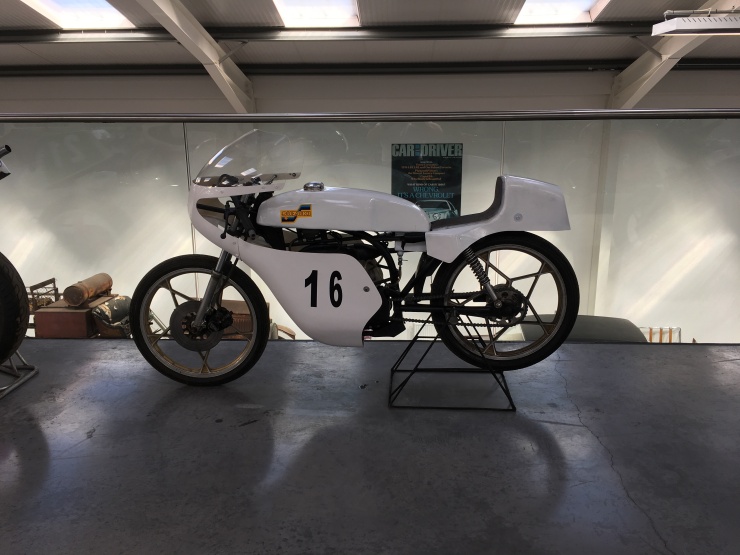 This bike was built by “Nobby” as a bit of a practical joke to contest the British and European 80cc Championship, the engine was taken from “Nobby’s” sons RM80 scrambler and the frame and wheels from the Suzuki X1 50cc road bike. 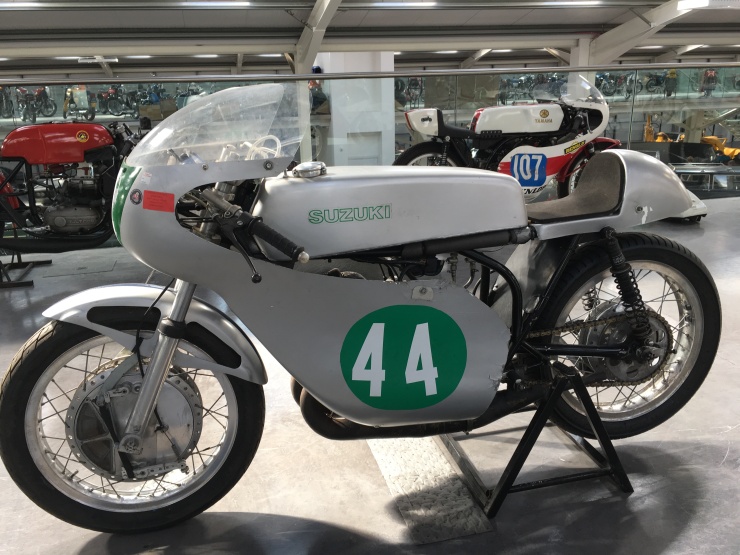 The Suzuki T20 “Super Six” 247 cc (15.1 cu in), two-stroke, twin-cylinder engine, and six speed gearbox. It was first manufactured in 1965 (but introduced as a 1966 model) and was produced until the end of the 1968 model year.  The T20 immediately had real success on the race course in the 1960s, and many are still used to this day in Classic Racing. The T20 has had notable success in the Manx Grand Prix and some riders have managed to lap the famous Isle of Man course at over 100 mph on heavily modified T20s.

This bike was built by “Nobby” to contend in the 1993 Classic Lightweight Manx Grand Prix where he finished 12th, coming back in 1994 after rebuilding the bike he went on to finish 5th and 6th in 1995. 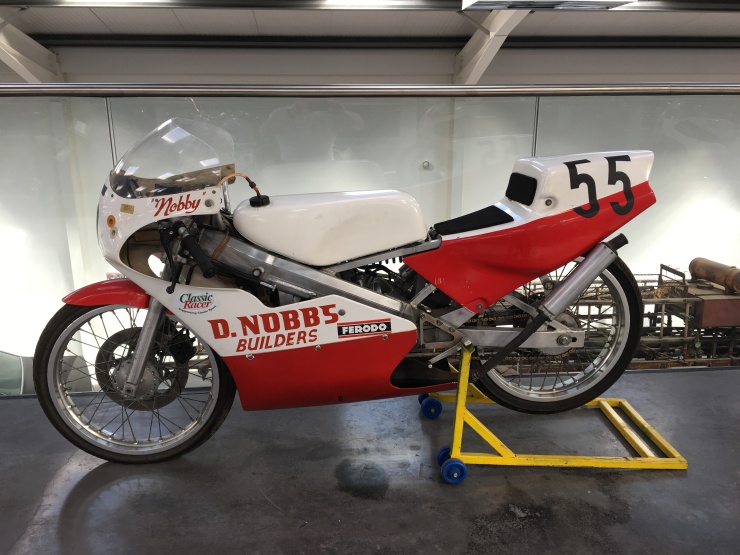